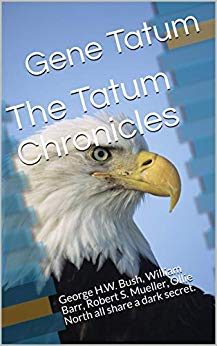 A sample Audio file to of The Tatum Chronicles is found below.

Whether you are a reporter, an academic, a political researcher or someone who just wants to know the truth no matter how ugly it is, the fantastic but true story of former CIA Pegasus agent Chip Tatum is someone who you must ABSOLUTELY learn about. Buy this book no matter what the price is (currently $200). You will learn a lot about high level criminality of George Herbert Walker Bush, Henry Kissinger and Bill Clinton among others.

HOWEVER, you can get a lot of this stuff for FREE on the internet just by googling “Chip Tatum Pegasus.” This is the story that is so radioactively truth that the MSM media, print, TV and academia just could not cover it when it came out. But it is critically important that you learn about it and tell others.

Of all the books on deep politics on Amazon, I give this my STRONGEST RECOMMENDATION. Remember, you can google “Chip Tatum Pegasus” and get most of this for free. But buy the book if you can.

You can contact me at Morrow321@aol.com or find me at the Education Forum, or on Facebook at JFK-The Grassy Knoll Witnesses.

From sensitive, highly secretive (and hitherto largely unknown) Special Forces covert operations in Cambodia, to wandering CIA asset; through to “black ops” activities in Grenada and Oliver North’s Iran-Contra “Enterprise”, as well as membership in an international “hit team”, Gene “Chip” Tatum has seen it all, done it all and is now telling it all.

Tatum claims to know where the skeletons are buried. Above all, he is aware that his testimony implicates serving and former US Presidents plus a whole list of high-level government officials and others in a welter of nefarious activities – including assassination, blackmail, coercion, gun-running, money-laundering and cocaine-trafficking.

Tatum, a lanky Floridian, turned whistleblower following his arrest on a treason charge in early 1995. The charge was both astonishing and patently ludicrous, and was later dropped and replaced by a fraud charge – a drastic step-down. Found guilty, he was sentenced to serve a 15-month sentence. In March 1996, an additional charge – conspiring to embezzle – was brought against him. Found guilty, he was incarcerated in Jesup Federal Correctional Facility, Georgia, where he is serving a 27-month concurrent sentence. Ensuing press interest resulted in one article appearing in the Tampa Tribune on 4 May 1996.

Many questions continue to hang over the conduct of the trial. His defense lawyer refused to call any of the 80 witnesses whom Tatum nominated for the defense. Later, his lawyer freely confessed to having come under pressure from the US Department of Defense. Tatum says the first charge was a set-up to discredit him following his “resignation” from “Operation Pegasus”. The second charge he views with greater skepticism and concern.>

Tatum’s resignation from Pegasus followed his refusal to “neutralize” a leading US political figure in the 1992 US presidential elections. Tatum declares he will not “participate in assassinations of any sort, character assassinations or anything, of American citizens”. He goes on to explain that back in 1994, in a telephone conference call involving Oliver North, Felix Rodríguez and the late William Colby of the CIA, he was warned to turn over incriminating documents and tapes he had accumulated for his “retirement”. He wryly observes that had he done so, he would probably have been quickly “terminated” in an “extreme” way – a specialty of the Pegasus team of which he was once a member.”

For the Full Audio Book Click Here.
For a hard or ebook copy of the Tatum Chronicles Click here