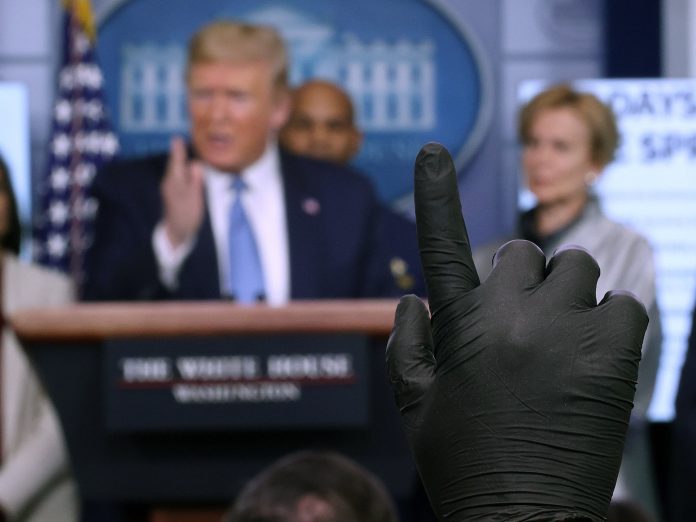 Apocalyptic novelist Max Brooks is something of an expert on planning for pandemics and other disasters. The author, whose books include World War Z, Germ Warfare and the forthcoming Devolution, has toured the Centers for Disease Control and Prevention and has reviewed government response plans related to various emergency situations — all in the course of research.

“We have a network in place that we as taxpayers have been funding to get us ready for something just like this,” Brooks says of the U.S. response to the COVID-19 pandemic. But, he adds, “we have been disastrously slow and disorganized from Day 1.”

Brooks says the notion that the U.S. government was blindsided by the pandemic is “an onion of layered lies.”

Instead, Brooks says, President Trump was slow to acknowledge the virus as a real threat. And thus far, the president has resisted using the Defense Production Act to force private companies to manufacture masks, gloves and other essential supplies in the fight against the coronavirus. Many government task forces that plan for disasters have yet to be activated in this crisis.

“One of the biggest problems we’re facing now is panic. You see it in the stock market. You see it in panic buying,” he says. “All of this panic could have been prevented. … If the president had been working since January to get the organs of government ready for this, we as citizens could have been calmed down knowing that the people that we trust to protect us are doing that.”

On the task forces that plan for situations like this 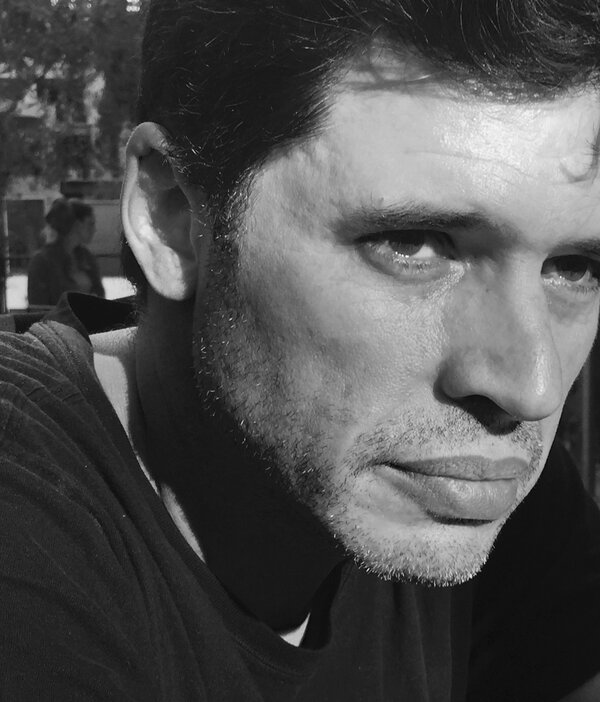 Max Brooks has researched disaster preparedness for his novels and has lectured on the subject at the U.S. Naval War College. He has also been a nonresident fellow at the Modern War Institute at the U.S. Military Academy at West Point. His new book, Devolution, will be published May 2020.

I can tell you that the federal government has multiple layers of disaster preparedness who are always training, always planning, always preparing, regardless of how much their budget gets cut. I have toured the CDC, and I’ve seen all their plans. I have witnessed what was called a “vibrant response.” This is the homeland nuclear attack scenario, which was a coordination of FEMA, the Army, the National Guard, state and local officials, all working together in a massive war game to prepare us for a nuke. I have also witnessed what was called a “hurricane rehearsal of concept drill,” where not only did the same players come in, but also bringing in our allies from Canada and Mexico. So I have seen that we have countless dedicated professionals who think about this constantly and they’re ready to go. And they have not been activated.

On why these task forces haven’t been activated yet

There is no excuse not to mobilize the full forces of the federal government right now and to centralize the response.

This all has to come from the federal government. This is why we have big government. Politically, you can argue about the role of big government in everyday society, but this is not every day. This is an emergency. The entire reason that we have these networks is when the bells start ringing — and they have not been activated. I don’t know. I’m not sitting in the White House. I don’t know whether the president is being lied to, whether he is holding onto a political ideology. I honestly don’t know. But there is no excuse not to mobilize the full forces of the federal government right now and to centralize the response.

On how the Defense Production Act works when mobilized properly

What is supposed to happen is the federal government has to activate the Defense Production Act immediately. Now, what Defense Production Act does is it allows the federal government to step in and aggressively force the private sector to produce what we need. And what is so critical in this is timing. Because you can’t simply build factories from scratch; what you can do is identify a supply chain in order to make it work. 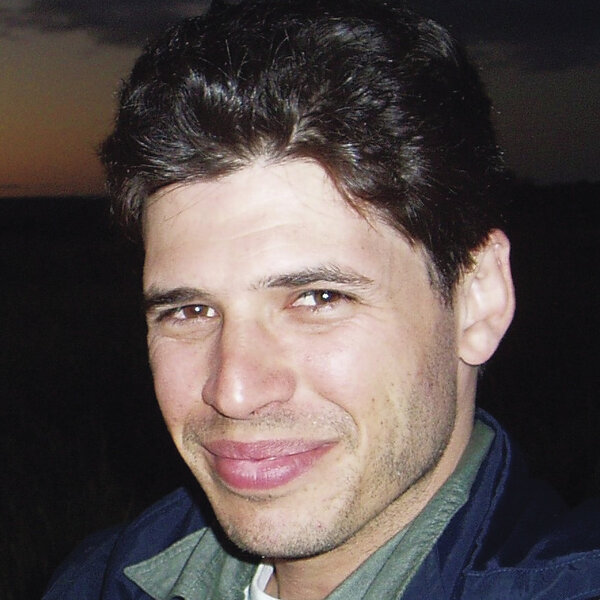 Novelist Max Brooks On Doomsday, Dyslexia And Growing Up With Hollywood Parents

President Trump is spinning some sort of tale about, I don’t know, the federal government — black helicopters coming in and taking over factories. That’s not how it works at all. What happens is the federal government has the network to identify where the production chain is and how to help the private sector work through this, because the private sector doesn’t know.

And as an example, I have a World War II rifle made by the Smith Corona typewriter company. Smith Corona worked with the federal government to then partner up with the Winchester company, to then share resources and to share tools and talent to then produce the rifles that we needed. That’s how it works. It’s not some sort of KGB coming in and taking over everything. It is guidance and streamlining. And only the federal government has the experience to know how to do that.

On what the U.S. military would do in a pandemic

I can tell you that the military has a vast transportation network here in the United States that is ready to go. We don’t have to put truck drivers or private individuals at risk, because the military is already trained to do this. And I’ve watched them do this. The military spent years working out the legal framework of how to transport goods from one place to another around this country, because it’s not like Afghanistan, where the army builds a road and then they own the road. The army has had to go through a tremendous amount of training and adaptation to work within state and local governments to make sure everything is done legally and safe without infringing on our rights. And they have done this. The Army’s logistics corps can deliver anything that we need anywhere in this country within a matter of hours or days.

When it comes to sheer massive might, getting stuff done, getting stuff produced and getting stuff moved from Point A to Point B, there is no greater organ in the world than the United States military. We did it in World War II. We’ve done it all over the world. We can do this now. This is the thing the military is good at, and we need to let them do that.

On how the pandemic is revealing flaws in our social structure

I think there are massive gaps in our systems that are being exposed right now, which, by the way, this is not news to the experts. Anybody who works in these fields could have told you years ago that we were vulnerable to this. It’s going to rip through our prisons. It’s going to rip through our homeless population. God willing, it doesn’t rip through our nursing homes. But what no one is talking about, what terrifies me, what keeps me up at night are the secondary casualties that will occur because of hospital overflow. What I mean is we’re only talking about now how many people are going to die if the coronavirus really rips through our country. What is not being talked about enough or what needs to be talked about are the people who are still going to die of cancer, of accidents, of other diseases, because they simply can’t get into the hospitals because the hospitals are choked with coronavirus patients.

In China, every single death will be laid directly at the feet of the Chinese Communist Party. They have all the power; therefore, they take all the responsibility. When we look back at this, we — all of us individual citizens — are going to have to take a measure of personal responsibility, because we are the government. If we don’t like our leaders, we shouldn’t have put them there. And as much as we would love to blame this historically incompetent captain of our ship of state, we have allowed the ship to rust underneath us. It’s not just President Trump’s fault that institutions like the CDC have been defunded for years. It’s not just President Trump’s fault that we have allowed anti-vaxxers to spread misinformation throughout this country. It’s not just President Trump’s fault that we are continuing to build a society in support of a tech world that is based on comfort and not on resilience. We as voters and we as taxpayers must accept our share of the blame.

When this is all over, when the dead are buried and the sick are healed, there will be a reckoning.

There is a massive amount of blame that will be laid at the feet of Donald Trump and his enablers. And when this is all over, when the dead are buried and the sick are healed, there will be a reckoning. But there were systemic issues way before Donald Trump. When Donald Trump was a carnival barker on a reality show, we as a people, as a nation, were dismantling the systems that were put in place to keep us safe. And we need to look at that damage, because the one thing we don’t want to do is assume that when Donald Trump goes away, that the problems will go with him.

On the difference between panic and preparation

Panic never helps. Panic implies that you lose your mind, and that in a war — even a war against a microscopic enemy — gives aid and comfort to the enemy. When you panic, you don’t think rationally, and in times of crisis, rational thought is the greatest weapon you could possibly have. So preparing, No. 1, means clearing your mind and thinking about what you have to do. It means making a list of what you need to buy, prioritizing what needs to come first, thinking about how you’re going to take care of the people around you. That is preparing. Panicking is freaking out and getting in a fistfight in the grocery store over bottled water when you don’t even need the water, when the tap is already running. That’s panic.

Right now we have to be so careful about who we listen to, because panic can spread much faster than a virus.

I think right now we have to be so careful about who we listen to, because panic can spread much faster than a virus. And I think in addition to social distancing, we have to practice good fact hygiene. What I mean is we have to be careful what we listen to, what we take in — just as if it were a virus. And we have to be careful also what we put back out, as if we were spreading the virus. So we cannot pass along rumors. We cannot pass along misinformation. We must be critically careful not to scare people into doing irrational and dangerous things. So we need to listen to experts, the CDC, Dr. Fauci [director of the National Institute of Allergy and Infectious Diseases], the World Health Organization, our local public health officials. These are the front-line soldiers that are doing everything to keep us safe and are literally putting their lives on the line. These are the people we need to listen to. What we cannot listen to is random facts on the Internet supposedly, things that people are passing along to us, conspiracy theories. And I’m very sorry to say this, but I think that everything our president says at this point must be fact-checked.

Scientists Probe How Coronavirus Might Travel Through The Air

All Of This Panic Could Have Been Prevented