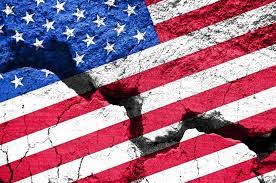 On the edge of civil war?

On the edge? No. The next US civil war is already here – we just refuse to see it!

The political problems are both structural and immediate, the crisis both long-standing and accelerating.

On the eve of the first civil war, the most intelligent, the most informed, the most dedicated people in the United States could not see it coming. Even when Confederate soldiers began their bombardment of Fort Sumter, nobody believed that conflict was inevitable. The north was so unprepared for the war they had no weapons.

In Washington, in the winter of 1861, Henry Adams, the grandson of John Quincy Adams, declared that “not one man in America wanted the civil war or expected or intended it”. South Carolina senator James Chestnut, who did more than most to bring on the advent of the catastrophe, promised to drink all the blood spilled in the entire conflict. The common wisdom at the time was that he would have to drink “not a thimble”.

The United States today is, once again, headed for civil war, and, once again, it cannot bear to face it. The political problems are both structural and immediate, the crisis both longstanding and accelerating.

The American political system has become so overwhelmed by anger that even the most basic tasks of government are increasingly impossible.

The legal system grows less legitimate by the day. Trust in government at all levels is in freefall, or, like Congress, with approval ratings hovering around 20%, cannot fall any lower.

Right now, Military Generals are warning of a military coup, Navy Seals are filing legal processes against the same administration that relies on them to defend Americans, Governors are making stands against Washington,  elected sheriffs openly promote resistance to federal authority.

Right now, various State sponsored militias train and arm themselves in preparation for the fall of the Republic.

Right now, doctrines of a new freedom spread across the internet, on talk radio, on cable television, in the malls.

The consequences of the breakdown of the American system is only now beginning to be felt. January 6 wasn’t a wake-up call;

It was a rallying cry!